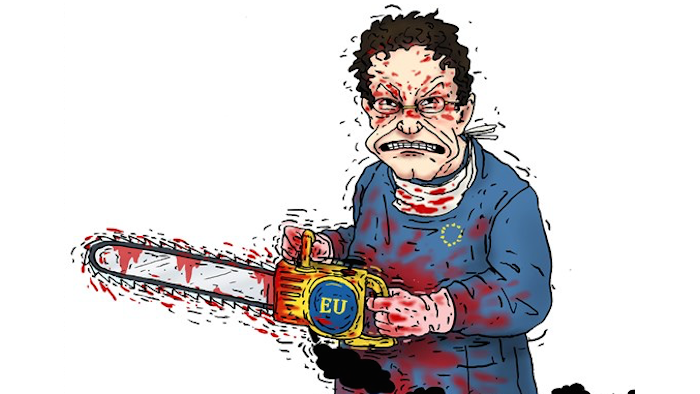 Can he hold together the monetary union and prevent a Greek default? As Jeroen Dijsselbloem is likely to be reappointed as president of the Eurogroup, Vrij Nederland looks into the career and style of the Dutch Finance minister.

Jeroen Dijsselbloem has been at the helm of the Eurogroup for more than two years now. He had absolutely no international political experience when he suddenly landed in the heart of European politics. His predecessor as Eurogroup president, Jean-Claude Juncker, a veteran in the European circuit, was known for his woolly language, backroom politics and long nocturnal meetings. Dijsselbloem has been doing things very differently since his appointment. He seldom lets meetings run over time. He cuts longwinded discourses of fellow ministers short. He stresses the need to stick to agreements. And he uses clear, straightforward language.

His straightforward language was the biggest adjustment for Brussels to get used to. The forthrightness of Dijsselbloem even led to an international uproar during his first big test, the handling of the Cyprus crisis. In March 2013, in an interview with the Financial Times, he confirmed that one of the measures taken to fight the crisis in Cyprus – depositors also having to contribute to the rescue of banks – would serve as a blueprint for other euro-zone countries.

He was swamped with criticism that he had dropped a verbal bomb on the financial markets. It didn’t turn out as badly as projected, but he was hounded by his statement for a long time. “Dijsselbloem can be rather upfront about things,” says Peter Spiegel, Brussels bureau chief of the Financial Times, who got the blueprint quote out of him. “He accidentally spoke the truth. That’s his style. He’s the opposite of Juncker, who once said: ‘If things get tricky, lie.’”

Last year, Dijsselbloem’s candour stirred up an international storm once again, when he called the same Jean-Claude Juncker an “inveterate smoker and drinker” on the Dutch TV programme Knevel & Van den Brink. The quote went all over the world. Juncker, who had just announced his candidacy for president of the European Commission, was compelled to make a public statement that he “does not have a problem with alcohol.”

Dijsselbloem doesn’t think his comment has damaged his relationship with Juncker in any permanent way. “It was an unfortunate joke that caused a lot of trouble for Jean-Claude. I apologized to him twice, first by telephone, later over a cup of coffee. That should put the affair to rest, you can’t string it out forever.” Meanwhile, says Dijsselbloem, his relationship with Juncker “is good.” “We are on the phone almost weekly to stay on the same page about Greece. Every time we meet he hugs me and gives me sloppy kisses.” Grins, and adds, “Although he seems to do that with everyone.”

To fare well in the Brussels stratosphere, one has to play the political game impeccably. The president of the Eurogroup has to deal with opposing players from seventeen nationalities, with vast cultural differences, even bigger egos, old feuds and hidden agendas. In often faulty English, this piebald assembly has to reach an agreement. All decisions are made unanimously in principle, so that whoever says “no” loudest can have a huge impact.

As president, Dijsselbloem then has to assess if this is a tactical no – meant to cement a better position for negotiation – or an ideological and immoveable position. According to Brussels insiders, Dijsselbloem is getting the hang of it. “His biggest accomplishment,” says Peter Spiegel, “is that the Eurogroup has never before been as unified as it is now under his leadership.”

December 2012. At the third European finance ministers meeting that Dijsselbloem attends as government minister, he hears that Wolfgang Schäuble, French minister Pierre Moscovici, ECB chief Mario Draghi and EU commissioner Michel Barnier are meeting in a separate room to discuss the formation of a Banking Union. He decides to go in. They are dumbfounded: who does this young Dutch upstart think he is? But they don’t send him away.

Another chair is fetched for him. For hours he joins in, talking about how to fight the crisis and save the monetary union. In the following weeks the German contingent starts spreading the rumour that Dijsselbloem may be a suitable successor to Juncker. Dijsselbloem gestures that this is insane when he hears of it from his staff; he refuses to believe it is a serious idea. But at the very next meeting Wolfgang Schaüble personally nominates him as a favourite candidate. The others have no objection. A few weeks later he can start his new job.

“Wolfgang Schäuble invented Dijsselbloem,” says one of the German minister’s employees. “He has an almost paternal relationship with him.” It feels like that to Dijsselbloem too. “Schäuble is a seasoned politician. He is a fabulous negotiator. Once you get to know him, he is also funny. He takes a sardonic pleasure in antagonising people, always with a smile. He is a mischievous man.”

The strong relationship between the two also has a flipside: from the moment that Dijsselbloem was appointed president upon nomination by Schäuble, he became known, especially in southern countries, as the flunky of the all-powerful Germans. And the frugal Dutch already have the reputation of being Germany’s strongest ally in the enforcement of the sacrosanct budget rules. The media have called him “Schäuble’s lackey” and a “clog-wearing German.”

But insiders say Dijsselbloem most definitely also picks sides against the Germans now and then. For example, in January he decided to travel to Athens immediately after the election victory of the radical left-wing Syriza – against the wishes of Schäuble.

Dijsselbloem is the face of the Eurogroup, but the lion’s share of his work takes place behind the scenes, in private meetings and telephone calls with colleagues and political leaders. He leans heavily on his staff in Brussels – the Eurogroup Working Group led by Austrian Thomas Wieser – and a small group of senior civil servants in his own ministerial department.

A woodpecker pecking a hole

According to Thomas Wieser, Dijsselbloem always remains calm, no matter how much of a hard time the Eurogroup ministers give him. “It’s always quiet in the eye of the storm,” says the top official. “I have never seen Jeroen get angry. He has infinite patience. He is like a woodpecker pecking a hole in an oak tree. That is the Dijsselbloem method. If there is still no solution after trying five times, he tries again.”

Brussels insiders say his knowledge of details and talent for creative thinking earn Dijsselbloem the respect of many of his counterparts in the Eurogroup. He says it also helps him to overcome any insecurity he feels: “It was the same when I was in the House of Representatives: I want to know every little thing, I want to master every portfolio. Otherwise I feel insecure going into a meeting. My concern is: what if someone makes a proposal and I don’t understand it.”

When Dijsselbloem speaks to Alexis Tsipras on the telephone on 25 April, after returning from a Eurogroup meeting in Riga, he explains that they cannot continue like this. Progress is too slow. Negotiations with Greek ministers and government officials are unstructured, fragmented and uncoordinated. He insists that Tsipras takes back control.

Two weeks later, after the next meeting of the Eurogroup, in Brussels, Dijsselbloem announces in the press conference that for the first time in months, progress has been made. What still seemed like a hopeless undertaking in Riga – reaching an agreement with Greece before 1 July to save the country from bankruptcy – now seems like a possible outcome. “There are still considerable differences to bridge,” he says, “but negotiations are now proceeding more efficiently and constructively.”

And in the meanwhile, Dijsselbloem’s first term is also close to its end. Officially he is still not a candidate, but the lobby has begun for his reappointment. The subject of his potential candidature has been raised in various subtle ways over the past weeks in the slipstream of his visits to Paris, Berlin and Rome. His chances seem to be increasing. According to Brussels analysts, the support that Angela Merkel expressed for Spanish minister De Guindos by no means means that Dijsselbloem’s chances are blown.

“Merkel has a reputation for being able to drop people when needs be,” says Peter Spiegel. “Nothing is final,” says Markus Ferber, leader of the CSU in the European parliament and vice-chair of the powerful Committee on Economic and Monetary Affairs: “elections are taking place in Spain in November. That makes De Guindos’ political future uncertain.” What’s more, there is a good chance that the powerful Germans want “Keine Experimente” in these tricky times. And then the choice would quickly rest on Jeroen Dijsselbloem.