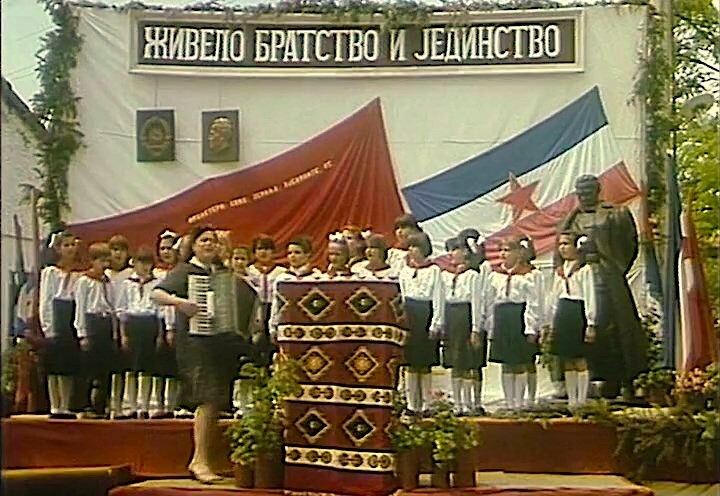 The ghost of “Brotherhood and unity”

Born in 1981 in the Yugoslav Republic of Macedonia, Rumena Bužarovska belongs to the generation whose "sweet Yugoslavian beach youth ended in slaughter". She followed the war in her homeland from Arizona. When she returned, there was not much left of the land of “brotherhood and unity”, the slogan of the League of Communists. But artists and activists of her generation succeeded in overcoming borders and creating a "new Yugoslavia", which for the author "exists more than ever".

One of the great things about the Yugoslavia I remember in the mid 80s is long summers. Over July and August, Skopje, the capital of Macedonia (now North Macedonia), would be no more than a deserted dreamy landscape punctuated by the soundtrack of crickets. My brother and I spent our long breaks from school in Mavrovo, in a house my grandfather built together with a partisan friend of his from the Greek Civil War, my grandfather being of Greek and his friend of Macedonian ethnicity.

The neighborhood of summer houses seemed to be mostly inhabited by retirees taking care of their grandchildren. While the grandparents played backgammon, tended to their gardens, cooked and baked, sipped rakija and ouzo and snoozed after big meals, the children roamed around the dirt roads, the surrounding forests and thickets, playing hide and seek, and “Partisans and Germans” if they were boys, or make-believe princess tales if they were girls.

I remember one day playing with two little girls and having a minor squabble with one of them. The girl I had had the fight with – Viki was her name – tried to undermine me in front of Beti, the other girl. She turned towards her, with eyes small and narrow, and said “You are playing with a Greek child”. I distinctly remember my surprise as what Viki had said and was quick to take a patronizing, know-it-all stance, blurting out nervously that we lived in a land where “brotherhood and unity” were the rule.

I went home rather shaken up and reported the altercation to my family. They responded with loud laughter. “Brotherhood and unity!” they repeated, making me feel as if I were ridiculed. I must have protested against their reaction, probably by getting visibly angry at being laughed at. My grandfather flashed me a smile with his gold tooth, telling me that they weren’t really laughing at me, and that in fact, I was right.

I wasn’t convinced. I pondered the slogan etched into my brain from school and the media “brotherhood and unity” (bratstvo i jedinstvo). The more I repeated the phrase, the more I imagined there was a hidden meaning behind it I wasn’t getting, a meaning the adults knew very well, but were hiding from me, who knows why. I felt just as confused as when a group of boys led by my 10-year old neighbor smeared cow dung all over another neighboring house’s doorknob, because Albanians lived there. I was even more confused that the boys stopped speaking to me after that, because they learned I had told my parents about the dung and the knob. I wasn’t sure what I had done wrong, nor why the boys had done this to our neighbors. I had never seen the Albanian family staying in the fairytale-like house right next to the woods. They kept out of the way of everyone else, shrouded in obscurity.

Those summers laden with a magical sense of mystery and tension – ringing laughter and hushed conversations – ended when we left the country that disappeared together with my childhood. My parents took us to Arizona where my body started changing, telling me that people were soon no longer going to consider me a child. My body changed within this confusion of being in a foreign land so different from ours, along with my grandfather’s death and the war of the breakup of Yugoslavia.

My mother would stand in front of the TV: war, she would tell me, this is war. There was footage of women in headscarves, dirty children and gaunt old men hobbling in a line of carts. My mother’s eyes were full of tears, her mouth open. I knew this was something terrible, and I realized from the urgent conversations among my parents and their immigrant friends that there was a chance we were never going back. The country I was born in was no more. War, something existing in textbooks, something my grandfather had helped solve, was back, and it was happening at home, the land of brotherhood and unity.

But we did go back. And things had changed. There were no more pictures of Tito looking at us from the center of the classroom. I did not miss that picture, even though it made me feel reassured when I was a child: someone brave and kind was looking at me do good work. But I was turning into a young woman and I didn’t need yet another man’s eye critically monitoring my success. I did not miss the sirens announcing the tragedy of his death, along with the eerie freeze that it breathed. Suddenly, I did not feel so terrible I had been born in the year after Tito’s death. It was no longer such a loss that my life did not overlap with his, and I felt embarrassed every time I remembered standing on my parents bed, looking hard at a portrait of Tito on the cover of an assigned book for school, trying to make myself cry, squeezing out a single tear.

Things had changed. We were happy we had less school because Serbo-Croatian classes were cancelled. Only one class per generation — in my case, mine, to my peer’s g…