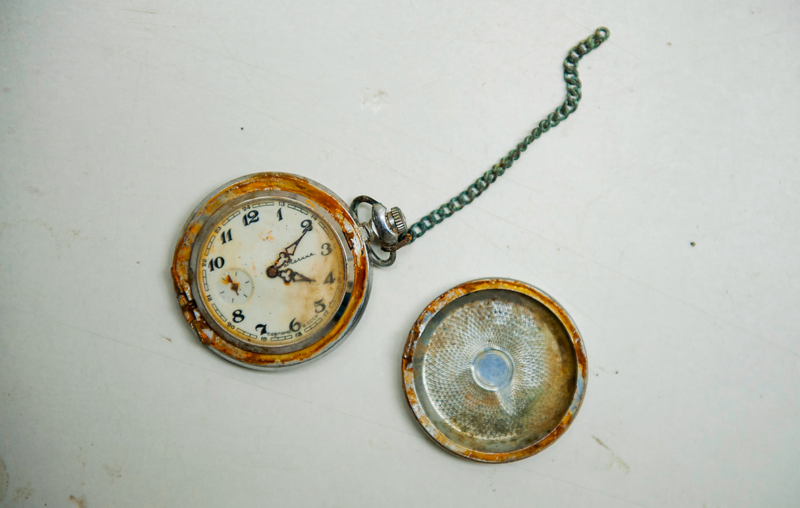 The apocalyptic clock ticking inside me

In this new feature from the Archipelago Yugoslavia series, the Bosnian cult author Faruk Šehić tells how a new era began in 1992, when his town was attacked by Serbian extremists, making him first a refugee and then a soldier. Since then, an “apocalyptic clock” has been ticking inside him. Even now, 30 years later.

A watch belonging to a civilian buried in a mass grave near the Bosnian town of Srebrenica, at the International Commission on Missing Persons' (ICMP) Podrinje Identification Project Center (PIP) in Tuzla, Bosnia and Herzegovina | © Midhat Poturovic

The era of my personal cataclysm begins on 21 April 1992. That was the day armed Serbian extremists, supported by the former Yugoslav People’s Army, attacked my town. These were our “neighbours”, fellow citizens, who had withdrawn from the town in a concerted action in order to attack us from the surrounding mountains.  The attack on my country had begun even before this date, for by 21 April many of the towns on the eastern border with Serbia (still called Yugoslavia at that time) had already been destroyed. The moment Slovenia, Croatia and Bosnia and Herzegovina left Yugoslavia, that state nominally ceased to exist in all our minds. Yet it turned against all of us who had loved it and contributed to its success in every possible way.

Every citizen of Bosnia and Herzegovina carries these two clocks, these two chronologies, deep within our consciousness, in our minds, bodies and hearts.

The first clock starts ticking at the moment it all officially began, the second is a far more important, more personal clock, measuring the time since the moment we were driven from our homes. It measures the time since we became refugees, or it counts the hours since the moment of our personal wounding, the death in war of someone close to us. Some clocks count down the time until the hour of our death. In my town, the clocks of five hundred soldiers will tick for as long as we, the survivors, exist. For as long as we remember our dead friends, relatives and fellow combatants.

It is impossible to put on paper everything measured by this personal clock. I have been trying for the last twenty years, ever since I started appearing in public as a writer, but I know I have barely moved beyond my starting point. Even the tragedy of a single person is indescribable, but here we are talking about the tragedies of hundreds of thousands of people from this country.

This personal clock is an apocalyptic clock. Every human has one. War is the apocalypse; it is just that there was no one back then to tell us. Just as there was no one after the war to tell us that we were living in the post-apocalyptic age. All we had to explain the kind of society we were now living in was the technical term, “post-conflict society”, handed to us by well-meaning people from abroad.

The cool terminology of academic language cannot begin to capture the full implications of the apocalyptic clock. It does not even recognise its existence, since the term “post-conflict society” only sees “warring parties”. Not every war has warring parties: sometimes there are just the attackers and the attacked. This is why the term is wholly wrong, just as the term “civil war”, which well-meaning foreigners use to describe our war, our apocalypse, is both wrong and a disgrace.

The apocalypse does not consist in the destroyed towns, villages, bridges, maternity hospitals and cemeteries. For me, the apocalypse is the moment in which all the values of civil society break down. The moment in which everything dreadful, abnormal and terrible becomes wholly normal, socially acceptable, even desirable.

This apocalypse occurs before the actual physical destruction. It occurs quietly, invisibly. The attentive newspaper-reader can detect the signs. All too often it takes the form of dehumanisation of certain social groups, individuals or entire peoples.

As an example, before the 1992 war broke out the Prijedor newspaper Kozarski Vijesnik published a series of articles dehumanising residents of Bosnian, Croatian and other nationalities. In one case, both Kozarski Vijesnik and Radio Prijedor carried reports about a trainee gynaecologist from Prijedor, Dr Željko Sikor, who had “induced abortions in Serbian women carrying male foetuses and castrated Serbian newborns”. Despite being ethnically Czech, the doctor was regarded by the evildoers as Croatian, since the Serbian nationalists at that time equated all Croatians with the Ustashas.

The Belgrade daily newspaper Ekspres politika dubbed him “the monster doctor”. Dr Sikora, along with two doctors of Bosnian nationality, is named in the official report of the then Federal Republic of Yugoslavia to the UN Commission of Experts under the heading, “Circumstantial evidence of perpetrators of inhuman treatment of civilians in Prijedor 1989-1992”. Their main crime is listed as the “Systematic suppression of the birth rate among the Serbian population in the district of Prijedor by means of the castration of newborns of Serbian nationality […] They used a range of medication and experiments to sterilise children in the Prijedor hospital, and deliberately misdiagnosed adults of Serbian nationality and gave them the wrong medication.”

As a result of these accusations in the media, Dr Sikora was murdered in the Keraterm concentration camp, a fate he shared with thousands of his fellow citizens of the “wrong” ethnic origin in other camps. His body was found next to a waste container in the camp grounds. Before being killed, he had been beaten up daily.

Kozarski Vjesnik is still published regularly. If you do a search on Željko Sikora in the newspaper archive, you will find no information about him whatsoever. Željko Sikora was the last male descendant of the Sikora family. Not a shred of evidence was ever found for his “crimes”, nor was he ever brought to trial. Even now, his name has not been cleared of this slander.

Dehumanisation and demonisation of groups, individuals and entire peoples had been going on long before war broke out on the territory of the disintegrating Yugoslavia. The aim of this approach was to prepare ordinary people to regard murders, massacres and ultimately even genocide as perfectly normal events.

I first became a refugee on 21 April 1992, and I do not suppose I will ever wholly cease to be one now, for refugeedom is not just a status in some Red Cross file, it is the feeling, deep inside, of belonging to nothing and no one. I love the land I live in, but not as a state, just as the land: the sum of its landscapes and natural beauties.

Becoming a refugee does not hurt physically, it is a totally pain-free process; but there are other, invisible parts of you that will experience terrible phantom pains for years afterwards. “Phantom pain” is the medical term for pain from a limb you no longer have, a limb that has been cut off. We have been cut off from our pre-war lives and these phantom pains are something we will carry with us to our graves.

One is confronted with one’s own life story and has to accept it, like all the scars carried on body and soul. In this way one is always moving forward, for the only thing that cannot be destroyed by an artillery shell in war is life itself. The desire for l…