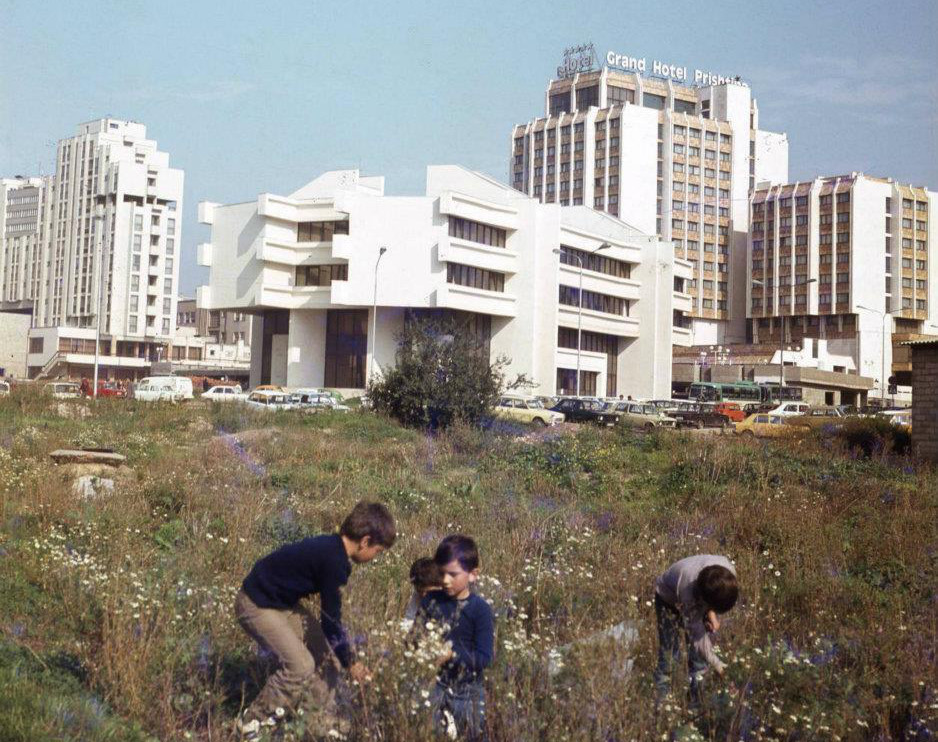 The “Better life” that never was

From the myth of Yugoslavian brotherhood to the dream of revolution and the nightmare of war: memories of childhood, turmoil and trauma in Kosovo. This is the first article of a series on the 30th anniversary of the breakup of Yugoslavia and the war that followed.

Pristina, Kosovo, in the 1970s | Once upon a time in Yugoslavia

My father isn’t a particularly sociable person. Conversation isn’t his thing. He doesn’t speak often, and even when he does, only briefly. On that September day in 1990, he didn’t even open his mouth. He came home from work and silently disappeared into his room.

It isn’t always easy to recognise when someone close to us is experiencing a collapse. And especially not when that someone is as reticent as my father. A mechanical engineer, at that time he was head of the energy department at the Metaliku factory near Gjakova, a town in the south-west of Kosovo, near the Albanian border. My mother worked in a textile factory, also in Gjakova. That autumn they were both sacked because, like thousands of others, they had refused to sign a declaration of loyalty to Serbia.

My parents were born when the Yugoslavian experiment was just beginning. I was born when the experiment was about to fail. All three of us experienced the “bolji život” [better life], as the Yugoslavs called it. Socialist Yugoslavia – a joint project involving multiple Balkan peoples – would give them a good, “better life” for many decades. The smaller ethnic groups, like the Albanians, were the exception. Even so, the three of us were able to get a taste of the Yugoslavian idyll. My parents were inspired by the famous Yugoslavian slogan, Tito’s motto that peace would last a hundred years; my generation, by contrast, lived with the constant sense that war could break out at any time. And so it did, at any time, and each time in a new guise.

“Bolji život” was never intended for the Kosovo Albanians. And the 1990s would sweep away the slogans with their declarations of brotherhood and a common peace project. What followed was open enmity, and the former fraternal solidarity withered to a distant memory. Strangely enough, this memory still remains with us today, in the form of the Monument to Brotherhood and Unity in the heart of the KosovoKosovon capital, even if it is interpreted differently now – one man’s glory is another man’s shame. My nine-year-old son just finds it ugly and bizarre. He is even more alienated by the former name of the sports complex: Boro-Ramiz. I tell him the story of the two partisans, both Yugoslavian heroes, one a Serb, the other Albanian. And of their sense of brotherhood, which stood as a symbol of the unity between the two peoples. He throws his hands up, dumbfounded.

The dinosaur-like communist architecture, with its almost sacral air, merges with the profane everyday life of the residents and passers-by, something that younger people, like my child, find extremely odd. These stone testaments to the myth of the brotherhood still have an astonishing power. Perhaps because the death of the myth resulted in violence and disaster, its last breath dragging us slowly, inexorably, into the abyss.

That September day in 1990 when my parents’ lives collapsed like a house of cards was another descent into the abyss. My mother occasionally talks about that day: how their lifelong labours and hopes for a better life were destroyed overnight. My parents never recovered from it: their lives lost forever any prospect of structure and continuity.

Kosovo’s status as an autonomous region within the Yugoslav Federation, which it had held since 1974, had been stripped from it in the spring of 1989. As a result it was now directly under Serbian police rule. My parents’ lives and my childhood were turned upside down. In the state of emergency, a normal life was no longer thinkable. The “better life” was now a thing of the past.

I was very young and so at first I didn’t grasp the seriousness of this turning point. But my routine gradually changed. My parents were now at home much more. Our freedom of movement was more and more curtailed: our weekend walks, the quality of our food. Everything began to shrink, including the population. For many who fled to western Europe or even further, across the ocean, Kosovo became the abandoned homeland. But my father refused to contemplate that for a moment. He would always remain true to this soil, he would never leave it. His sense of connection with his homeland was too deep for that, even if outwardly barely perceptible: it was rooted in his turbulent family history. His grandfather had been killed by the partisans, his father had been driven to ruin by the communists, who had forced him to move to other towns.

More : Back to the future with Yugo-nostalgia

The state of emergency and the police measures hit us hard. At our extended Saturday evening gatherings my father, trying to keep family life as normal as possible at a time of ominous upheaval, would take refuge in memories of his student days in Zagreb. He would tell us stories from what he thought of as the best time of his life, or of his travels through Europe in the 1970s and 80s, when Kosovon Albanians who could afford to do so were allowed to move freely.  These were the only stories he wanted to tell, and I loved listening to them. They taught me the source of his love. As I listened to them, I dreamt of other lives, other places, other worlds. What was out there, beyond the borders of our threatening reality? That remained a mystery to me, and I learned to live in my own tiny world. We no longer travelled; just once a year, we’d holiday in Ulcinj, on the Montenegrin coast, where we had a summer cottage.

I pictured that unknown world and those unknown places as very beautiful. I never dared ask where the border was. There were so many borders, both visible and invisible: political, economic, linguistic, cultural. The other world remained unknown, and I became a perpetual dreamer.

Even dreaming was a “crime”, but no one could stop me, and I told my dreams to myself. The dream of freedom was a beautiful silk cloth.  The dream of a national uprising was a tattered, mended cloth. The God of Justice in that dream was not just when he gave us such grand dreams. Because ultimately, it all remained just a dream. To this day I remember those dreams, which seemed so tangible to me back then, on the streets where the protests were held.  I dreamt my dream of freedom on the roadsides, on the main square, in the midst of crowds of thousands marching, like soldiers, without flags. I believed the great men who called us children “little heroes of the future” weaving the freedom of tomorrow from the roadside of yesterday.

To take to the streets was to face the reality of our oppression – it was where the powerlessness of a ten-year-old met the national drama. This was one of the most powerful experiences of my childhood: an emotional turmoil made up of revolt, pride and fear. I patched my dream with slogans – “Freedom! Democracy!”, “Kosovon Republic!” – until, at the close of day, it was torn to shreds again and, disappointed, we went home. In this confusion I dreamt of the great revolution that would bring peace, never suspecting that a childhood lived in such a dramatic, tense time would complicate, even distort, our later experience of peace. I was a child living in a continuous state of war and wondering every day what new war would break out tomorrow.

However far removed from our family life these great dreams might have been, at home everything was good, so long as there was enough to eat. After she was sacked, my mother became a housewife, while my father ran a small chicken farm on Grandfather’s land. In calmer t…