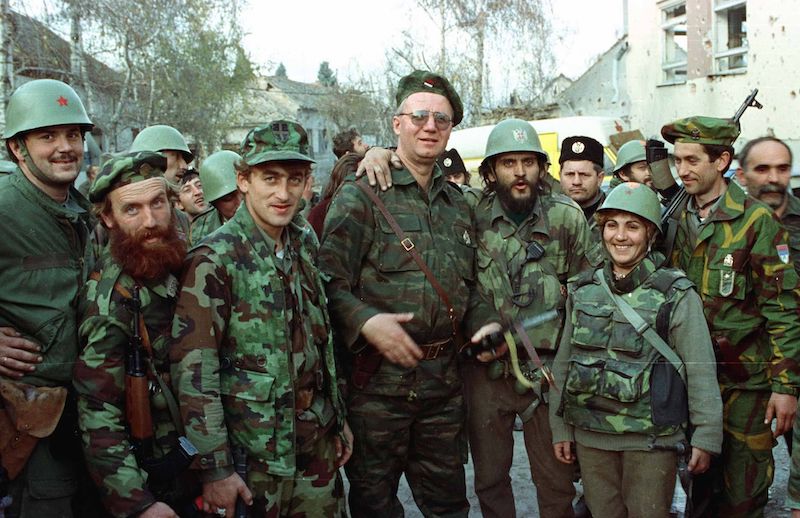 Life in the crime scene

Tomislav Marković was 14 years old when Yugoslavia broke up. 30 years after the collapse of the socialist system in which he had believed, the Serbian author, who grew up in a climate of hatred, violence and crime denial, is still trying to understand how the people of his homeland turned into monsters. Second of our series of features on the 30the anniversary of the breakup of Yugoslavia and the war that followed.

Serbian nationalist leader Vojislav Šeśelj along with some Chetnik Serbian paramilitary near the Croatian city of Vukovar, in 1991 | DR

The blood-soaked collapse of Yugoslavia happened during my childhood and adolescence. While Slobodan Milošević, supreme commander of the evil horde, was striving to destroy my country, I was developing both as an individual and as a thinking being. I can say, not just for myself but for all of us born in the 1970s, that our experience of the collapse of Yugoslavia had a decisive influence on us, that it shaped us as people and determined what we have – and will – become. “The breakup of the Socialist Federal Republic of Yugoslavia” may be the commonly used term, but it is not the most accurate one: rather, it was an act of savage, treacherous murder committed from the basest of motives. The date of the crime is generally set at 1991, the year in which Slovenia and Croatia broke away from Yugoslavia and the armed conflicts began.

I lean more towards the view of the lawyer Srđa Popović, probably the wisest interpreter of our horror, who dates the death of Yugoslavia to 28 September 1990, the day on which the Serbian Constitution was adopted, representing to all intents and purposes the secession of Milošević’s republic from the federal state. With this act of law, Serbia declared itself an independent and sovereign state, and from then on no longer respected the legal order of the SFRY. Serbia was de facto the first to break away from Yugoslavia, something that went unnoticed in the general chaos of that turbulent time, masked by Milošević’s propaganda about preserving the federal state, behind which he concealed his plan to wage wars and create a Greater Serbia with himself as absolute ruler.

I was 14 years old at that time, and in Year 8 at school. What followed was the total collapse of a world I was only just getting to know, the world of a socialist system that had seemed solid and stable, as though it would last for ever. Everything I had been taught during my eight years in school suddenly did not apply any more, everything was destroyed in fire and blood, and from this fire and blood something new and different was born: something deformed, far, far more terrifying than Dr Frankenstein’s monster. And so, as Radomir Konstantinović used to say, our life with the monster began. And it has continued right up to the present day, for the nationalist monster is still alive and kicking: it has simply retreated to its cave to lick its wounds after multiple defeats in war, awaiting an opportunity for renewed human slaughter.

Hatred, chauvinism, violence, crimes, concentration camps, genocide, destitution, social disintegration, criminality, national homogenisation, rehabilitation of the Chetniks, bands of volunteer militias, warmongering, bombardments, isolation, sanctions, conspiracy theories, denial of crimes, glorification of mass murderers – this was the environment in which I grew up. But I have no time for self-pity or lamentations about my terrible fate, all-too common traits in this region: I got off lightly. I was in the land of the aggressor, on whose territory no war was waged. I was lucky, unlike many of my peers in Croatia, Bosnia or Kosovo, who suffered because they were not Serbs and whose school friends, neighbours, parents, family and friends were killed.

The search for a rational explanation

Towards the end of his life Srđa Popović wrote in his notebook, “First man lives; later he understands what he has really lived through.” This wise aphorism also applies to me, though with a slight adjustment: first the boy lives; later the man tries to understand what the boy really lived through. Decades of practice have shown the task to be anything but easy. I have read thousands of pages about what befell us, hundreds of excellent texts and analyses, dozens of clever, well researched books that explain almost everything, but still I have the feeling that nothing has become clear. Worse still, I myself have written several thousand pages about the murder of the SFRY, Greater Serbian nationalism, war crimes, denial, the roles played by intellectuals and the church in the nationalist counter-revolution, historical revisionism and dozens of similar subjects, but still I am tormented by the same sense of the incomprehensibility of the horror in which we have continued to exist in the decades since.

I am not the only one who has this sense. I share it with people who have studied our apocalypse far more seriously, thoroughly and knowledgeably than I have. In the summer of 2000, after dozens of interviews and articles and many years in which he had first warned of what would happen and then forensically analysed Serbian society’s descent into evil, Srđa Popović spoke about friends of several decades’ standing who had gone over to the other side, spread hatred and deliberately incited war and violence: “They transformed my understanding of human nature. It became clear that people are capable of unforeseeable metamorphoses, that friendships are fragile, that under certain conditions humans can turn into monsters. I am still trying to understand how that happens. Without success. I know that some of them wanted a quick route to power, some were carried away by cheap applause, some were corrupt, but I still cannot understand this extinguishing of all reason, all honour, all decency, all human compassion.”

Sonja Biserko’s book, Kovanje antijugoslovenske zavere [The Forging of the Anti-Yugoslavian Conspiracy], provides a comprehensive analysis of the intellectual elite and the Serbian national programme as well as a timeline of events from 1966 to 2006 and hundreds of quotes. After a scholarly and detailed account of the genesis of Greater Serbian nationalism, running to nearly 400 pages, she concludes, “There can be no rational explanation for everything that has happened in Serbia, not just during the last two decades but in the whole of the 20th century. There is no rational response to the avoidable victims of the wars that were waged in the Balkans in the 20th century and the years of megalomaniac arrogance.” No matter how thoroughly the evil and its morbid manifestations are studied, and even if rational explanations can be found for each individual act of political and ideological violence, there is always an irrational residue that defies rational categorisation. There always remains an inner disquiet that pounds ceaselessly in our heads, endlessly repeating the same question: how on earth was all this possible?

This is precisely what the character in Faruk Šehić’s short story, Pregaženi čovjek [The Run-Over Man], is talking about when he says, “If someone can explain to me what kind of person wakes up one morning in 1992, takes his rifle from its hiding place, hangs the Serbian tricolour with its fourfold “S” above his door, goes to his neighbour’s house, chases him out into the mud, forces him to his knees, pulls out his bayonet and slaughters this human, his neighbour, best man at his wedding, his friend of many years; if someone can explain it to me rationally, break it down into simple parts, then it will be easier for me to live. I do not believe there is any such answer. Modern science, parapsychology, religion, metempsychosis: nothing and no one has a magic formula to settle this question that we will all carry with us to our graves.”

The encounter with evil

We all experienced what Joseph Brodsky described in his speech at a graduation ceremony at Williams College as “the encounter with evil”. A simple, laconic phrase for something we will spend the rest of our lives trying to comprehend. On another occasion Brodsky described the Stalinist system as an “anthropological catastrophe”, a term that also applies in our case. It would be a candidate as the official designation for our social order, too. I do not live in a democracy or a dictatorship or a stabilocracy – I live in an anthropological catastrophe. Of all the terms to describe this anomic, amorphous order, this syntagma strikes me as the most apt.

History or some other personified power from the underworld gave my distant predecessor of thirty years ago, that boy who has since vanished, an encounter with evil. Several decades later the man who, as Zbigniew Herbert says of his younger self, “has nothing in common with this boy other than a date of birth and a papillary line”, is trying to translate that juvenile experience into concepts of some kind, to understood what happened, for in the meantime he has acquired an apparatus of knowledge and analysis that was not available to the confused boy.

It is easy to pull apart the nationalist gibberish of a Dobrica Ćosić or Matija Bećković and turn their chauvinist platitudes about “humane resettlement” or “the dearest Serbian word” on their heads, but coming to terms with the experiences of the former boy is hard. For it was neither Ćosić nor Bećković who drew up lists of traitors in December 1990, people who had not voted for Milošević’s Socialist Party of Serbia: death lists that also included…