Ideas Archipelago Yugoslavia | Croatia
The Croatian town of Vukovar after the 87-days siege by the Serbian-led Yugoslav army, in 1991. 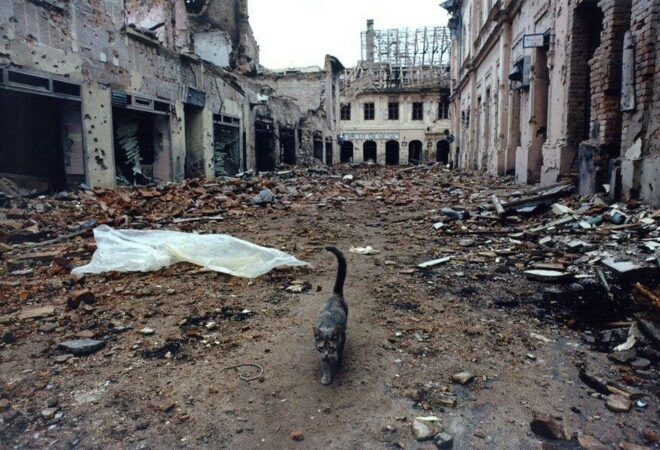 I don’t write about war because I want to, but because I have no choice

Zoran Žmirić was born in Rijeka in 1969. He fought on the Croatian side in the war, was wounded and for ten years afterwards was unable to sleep. All his books, which have won numerous awards, deal with his experiences during that time.

© Mladen Pavković  | The Croatian town of Vukovar after the 87-days siege by the Serbian-led Yugoslav army, in 1991.

I’m having a coffee with Liam, who deftly rolls a cigarette, moistens the paper with his saliva, exhales the smoke and then says, “I read a chapter from your novel. Excellent translation. Do you always write horror?” Galway and Rijeka are the 2020 European Capitals of Culture, so I was bound to run into one of the more active members of the Irish art scene sooner or later. Liam is a fingerstyle guitarist, painter, poet and, for the duration of my short stay in Galway, also my host and guide.

I have no choice, I’m going to have to do my best here, even though I can see that nothing will come of it. Age and interest-wise we have a lot in common, but I can see we’re not going to understand each other, and not because of my limited English or Liam’s strong Irish accent. “That wasn’t a horror story,” I tell him. “That was Balkan reality.” On Liam’s face I read amazement and sadness, but beneath the surface I also sense a barcode reader with which he is trying to detect at least a trace of sarcasm on my part. He cannot find any sarcasm, though, and so, as though speaking only to himself, he mutters, “For fock sake”. The swear word, heartfelt and involuntary, tells me that the trauma of the Balkans will perpetuate itself ad infinitum and that we will never find any solace for it outside the borders of that self-contained region. He does not even realise he is only confirming my theory when he says, “Yes, war trauma is a terrible thing”. We do not understand each other, we cannot understand each other, but even so, I still take on the challenge of trying to explain it all to him. Not for his sake, but for purely selfish reasons, for it brings me relief to talk about it again.

I can remember the exact moment the trauma began. It was far from being a moment that someone from outside, someone like Liam, would automatically accept. I am not talking here about trauma caused by the experience of war itself. I am talking about the trauma experienced by someone trying to lead a normal life again after war: the trauma inflicted by his own environment. I do also remember the moment when I went to war, of course. We were sitting in the Palach club, drinking beer and listening to rock music.

The TV news was on, protesting Serbs had turned off the drinking water supply to a psychiatric hospital in Vrlica [Northern Dalmatia, editor’s note]. We were all watching TV together and someone said, “They’re crazy, they won’t rest till they’ve got everything they want”. I wasn’t quite sure what they did want, but I knew that someone had to stand up to them. Someone who always resisted at every opportunity, whether appropriately or inappropriately. Someone with the knack of intervening in a brawl and breaking up the fighters without knowing who had started it or why, someone who had stood up to his classmates when they picked on the Roma children or the Albanians in school. Someone like me.

The first indication of the trauma was frustration. We arrived in the combat zone, where the commander informed us we should save the last bullet for ourselves. I found it hilarious, a cliché straight out of a movie. But then it all got going, and it was about something I had encountered before and knew to be anything but harmless. They told us we were there to defend the state borders, democracy, survival, the centuries-old dream and more, some of which didn’t mean much to me. I was as indifferent to this state, both the old one and the one just formed, as I would have been to any other state I’d suddenly been forced to start living in. I came from Rijeka, after all, a city that had switched country nine times in less than a hundred years. I’m sorry, but with the best will in the world, the idea of getting excited at the realisation that you’re living in one of these new states set up by the politicians and their deals is something I can’t begin to relate to. For me, borders are just lines in an atlas – today like this, tomorrow, who knows.

The commander’s welcome speech made me think of my Uncle Ivan, who went to war as a 14-year-old in 1942. The Italian soldiers were setting villages on fire, indiscriminately, one after another, and as they were approaching my uncle’s village, he grabbed a pitchfork and, together with others his age and a little older, attacked them. After this successful action, the partisans promptly divided him and the other men from his village into groups, imposed discipline, and then explained to them that their fight for sheer survival had in reality been motivated by the desire to bring down the current system and that their real goal was to build a better world.

My uncle didn’t even know what “class struggle” and “world revolution” meant, he had never heard of Marx or Lenin, let alone socialism. All he cared about was sending the fascists back where they had come from so he could get back to his own way of life. I thought about that while the officer in front of us confidently threw phrases around and became morbidly intoxicated on his own rhetoric, a rhetoric that had disappeared without trace, mind you, when I saw him on TV a decade later, conspicuously silent at the International Criminal Tribunal in The Hague. But at the time in question, as I was standing in front of him, I associated my experience with that of my Uncle Ivan, connected the two dots on the timeline, almost in the same space, and got the distinct feeling that something was not right.

My feeling that something wasn’t right intensified as the fog lifted. After a stay in hospital, I did not leave my home for a whole year. During that time one person after another from my battle unit would drop by and tell me not to worry, they would do everything they possibly could to get me a better pension. But I wasn’t worried, for I didn’t want the pension. I just wanted my old routine back, my life. But these people thought they were doing me a favour, and carried on talking about how they could top up my existing invalidity pension, how they would retrospectively document that I had been wounded in the course of a military action that had taken place after my discharge from the army, for they knew the right people and wouldn’t leave a friend in the lurch. I thought they must think very highly of me if they were willing to lie, just to make my life easier after the war.

But the more I resisted, the more vehemently they insisted, and eventually their insistence segued into aggression. Then, at last, the scales fell from my eyes. They weren’t doing it for me, they were doing it for themselves. A new group of claimants had been set up, and its success would depend to a large degree on how many members it had. They were demanding privileges and hero status and everything that went with it. As soon as I realised that, I took my leave of these people for ever and in their eyes I was no longer the long-haired youth in the punky leather jacket who had fought for sheer survival, but someone who hated his country. But the truth is different: I did not fight for a land I do not love, rather, I do not love the land for which I fought.

I owe this leap in my thinking entirely to the deviants who sought to exploit the war as a start-up platform for their own advancement; the clique that persuaded first themselves, then everyone around them, that their participation in the war had made them special; that they should have monuments erected to them in their own lifetimes, and privileges too. And among them there was also a special caste, those who had positively yearned for the chaos, relished the outbreak of violence, and enriched themselves on the suffering of others. It is because of these people that anyone who fought in the war but still managed to preserve their humanity is now deeply ashamed to even mention their involvement. For normal people, these people constitute a greater trauma than the war itself. I feel genuinely sorry for anyone who cannot understand that.

But these people aren’t even the worst thing in our picture book of Balkan horrors. The worst thing is that they fit perfectly into today’s system. Competence is not valued in this state; instead, political activism with a national slant is what counts, at every level. If this were only true of our top politicians, that would be wonderful because it would mean that the pyramid was working well at its lower levels. But the opposite is the case. All aspects of the state, both those of vital importance and those at lower levels, are run by wholly incompetent yes-men. Societies and sports clubs are managed more rigorously than the state itself. Societies and clubs pursue clearly formulated objectives agreed by the members as a whole, while the politicians treat the state like a cash machine from which they can withdraw limitless amounts of money, while the little people form a queue and wait for one of these politicians to accidentally drop a coin. For them, the hardworking, decent people, there is no profit to be had from this cash machine. Moreover, the arrogance of the politicians is utterly shameless.

With every action, every statement, they give the impression of mocking the people, as if one were to beat up a dying person or make fun of the disabled. I have long been allergic to those who mock others. In my view, it’s quite simple: I believe the majority has a duty to protect the minority, regardless of whether this minority is defined by nationality, social position or sexual orientation. But in this country precisely the opposite happens, and this is a trauma that has endured in Croatia far longer than the war.

For ten years I could not sleep.

Liam listens to all this in a pub in Galway, nods eagerly and is probably wondering if I am just using him to spur my own imagination and try out some future dialogue in some future novel, or whether something really did happen, and continues to happen, in Europe, only a short distance from his own country, that is beyond his comprehension.

“Have you killed?” he asks, but then bites his lip and adds apologeticall…