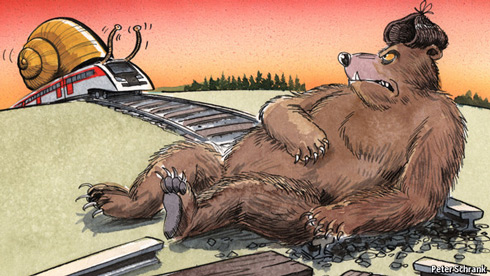 A high-speed rail link connecting Lithuania, Latvia and Estonia could economically revitalise eastern Europe, strengthening its EU ties and ease its reliance on Russia. Instead, the Rail Baltica project is trundling along, beset by bickering between the three neighbours.

The 600km-long human chain that stretched from Vilnius via Riga to Tallinn in August 1989 came to be the emblem of the Baltic states’ struggle for freedom from the Soviet Union. But more than two decades after they regained independence, their three capitals have no direct passenger train service linking them to each other, let alone to the rest of the European Union. In terms of infrastructure the Baltics are still “captive nations”: the railways run east to Moscow and St Petersburg; the electricity grids are synchronised with Russia’s; and they are largely dependent on Russia for gas.

Thus it was heavily symbolic [last] week when the European Commission laid on the first proper inter-Baltic passenger train since the 1990s. Packed with Eurocrats and transport-industry folk, it rumbled for the best part of two days through birch and pine forests, greeted at every stop with music and speeches. It was a foretaste of the EU’s flagship project: Rail Baltica, a modern fast railway that would cut the journey to about four hours.

By switching from Russia’s 1,520mm gauge to continental Europe’s 1,435mm one, the new railway would offer a sense of security, a step away from Russia and closer to “Europe”. The EU’s transport commissioner, Siim Kallas, himself an Estonian, dreams of fast train services from Tallinn all the way to Berlin.

You can unsubscribe at anytime *
Categories
EconomyTrade and industryEstoniaFinlandLatviaLithuaniaRussiaEuropean Union