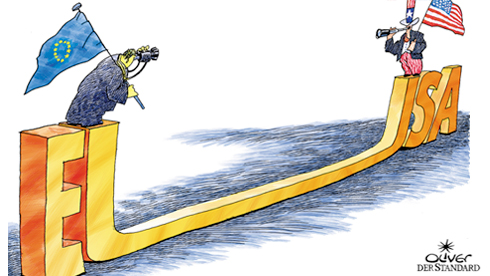 The EU-US trade talks, which begin in Washington on July 8, could unlock tens of billions of euros worth of savings and cut away needless bureaucracy. But a lack of trust after the recent US eavesdropping scandal is only the first of many hurdles to be overcome.

Washington DC is not a city that lacks for bureaucrats. This week there will be even more of them than usual. The US capital is about to play host to the first round of the bilateral trade talks between America and the European Union, a sweeping set of negotiations, the ultimate aim of which is to reduce the obstacles to the two economic blocs doing business with each other.

In broad terms, the two sides will try to eliminate import duties on goods traded between the economic giants. They will also battle to reduce red tape, so that international businesses can expand more easily.

The sheer scale of America’s commercial relationship with Europe means that even minor improvements will have a major impact on the economies either side of the Atlantic.

As Europe faces another year of stagnation and economists obsess about the growing clout of emerging economies such as China, India and Brazil, the trading relationship between the US and EU remains the biggest in the world.

Birth of a giant

The creation of a EU-US free trade zone could change the world’s political and economic geography for years to come, writes Marek Magierowski in Do Rzeczy. It will mean not only the “scrapping of tariff barriers but also the introduction of common regulations and standards in all kinds of sectors,” he writes, adding –

the Transatlantic Trade and Investment Partnership (TTIP) is doubtless the most ambitious such endeavour since the launch of the World Trade Organisation in 1995.

The London-based Centre for Economic Policy Research thinktank has published a forecast suggesting the TTIP would mean huge profits for both sides: $119bn (€92.7bn) in extra income for the EU and $95bn for the US. EU exports to the US would rise by 28 per cent. The project also has “massive political significance” and could bolster Europe and America’s waning global position.