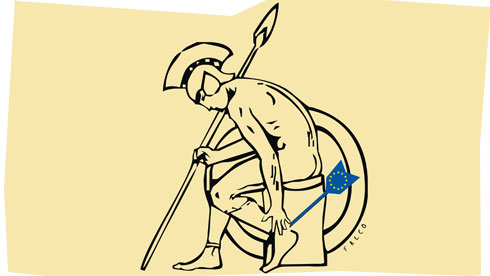 The caprice of the Brussels gods

While the living standards of Greeks keeps falling and the troika’s management of the crisis has been called into question, European institutions continue to look elsewhere. It is high time the Commission was held accountable for this appalling tragedy.

If they only still had their gods of antiquity, perhaps the Greeks could understand better what they are going through. The injustice they are suffering, the apathy and the casualness of a Europe that, for years, has been standing at their bedside, humiliating them, all the while declaring that it has no wish to expel them – while, in its heart, the Greeks are already on the outside.

Perhaps the Greeks understand why a summit was held in Rome on June 14, attended by the finance and employment ministers from Italy, Spain, France and Germany to discuss joblessness – an issue that has suddenly taken centre stage – and why none of those ministers had the idea of inviting the worst-off of all the member states: Greece, with unemployment at 27 per cent and more than 62 per cent among youth, the highest figures in Europe.

Greece has been a stain on Europe since the austerity cure began. It has paid for all of us, been used as our guinea-pig and scapegoat. At a June 6 press conference, Simon O’Connor, spokesman for the Commissioner for Economic Affairs, Olli Rehn, admitted that [the Greek crisis] has been a “learning process” for Europeans. They are perhaps now taking a different tack with other countries, but this is no reason for complacency: “Keeping Athens in the Eurozone was not an easy task… We strongly reject claims that we have not enough done to spur growth”.

Such was the reaction of Simon O’Connor and Olli Rehn to a report just published by the International Monetary Fund – that same IMF which, alongside the Central Bank and the European Commission, is part of the famous troika that has drafted the austerity programme for the countries in deficit and that keeps watch over them from its commanding heights. That report is a severe indictment of the strategies and conduct of the European Union during the crisis.

‘Could have done better’

Greece “could have done better” if its debt had been restructured and streamlined from the outset. If the plans had not been implemented with the disastrous slowness that stamps decision-making by unanimity. If a common supervision of banks had been agreed upon in time. If growth and social consensus had not been considered as negligible factors. The only thing that mattered was to prevent contagion and to save the money of creditors. For this, Greece was punished. Today it is treated like a pariah in the Union and everyone glories in their success because, technically speaking, Greece is still in the Eurozone, while in all other respects it is ostracised.

Farewell the troika, then? Nothing is less certain, given that citizens have no opportunity to punish it for its misdeeds, and given the condescension with which the IMF report was met. Ideally, it should lose its seat at the European Council meeting of June 27 and 28, devoted to the unemployment that the three “Moirai”, or Fates of the troika have left to inflate with total abandon.

The European Parliament will not dare let out a peep, and over at the ECB, Mario Draghi’s responses have been evasive, even smug: “The positive point that emerges from the IMF report is that no fingers have been pointed at the European Central Bank.” The IMF itself is ambivalent: all its statements are dotted with oxymorons (assertions that are both “subtle” and “stupid”, according to the etymology of the term). There was indeed a failure, but it is deemed to have been “necessary”. The Greek recession “surpasses all expectations”, but it is “unavoidable”. Illogical fate still reigns supreme, but it now falls to humans to manage the consequences.

In reality, the reasons for satisfaction are few and far between. The European Union has not grasped the political nature of the crisis – the lack of unity and European solidarity. There remains only a perverse interlacing of morality lessons and profit-and-loss calculations, and a panicky fear of contagion and moral hazard. To write off the debts without delay, as so many experts demanded, would have rewarded failure. And then, the IMF report points out, Europe preferred to protect creditors rather than fight contagion: putting off making decisions “gave the banks the leisure to withdraw their money from the Eurozone periphery”. The Bank for International Settlements cites Germany, whose banks have repatriated a total of €270bn from five countries (Greece, Ireland, Portugal, Spain and Italy) that found themselves in difficulties between 2010 and 2011.

But the true stain is deeper. It’s on the concept of the public sector, always under suspicion, that the axe has fallen, and it’s here in particular where wages and employment have plummeted. And democracy has suffered, starting with information services, the climax of which came on the night of June 11, when the Greek government suddenly shut down the nation’s public radio and television broadcaster – the ERT – with the tacit complicity of the troika, which has demanded massive layoffs of public employees.

By continuing to keep alive the hypothesis of a Greek exit, Europe has broken the bond of trust between the members of the Union, giving rise to a form of war. There is no longer any room for some countries that are untrustworthy, that lack power: The Disasters of War, by Goya, in fact. Athens has not been invited to the Rome Summit, and nor has Lisbon, since Portugal’s Constitutional Court ruled that two paragraphs of the troika’s draft were contrary to its constitution.

Portugal has been treated as a pariah too [– despite the government in Lisbon finding a way around the ruling to come up with further cuts]. “We are delighted that Lisbon will pursue the agreed therapy: it is essential that key institutions stand together to support the country”, the Commission declared two days after the verdict, rejecting any idea of a renegotiation. The kind of press release that would never be written on the decisions of the German Court, deemed unalterable.

Such stains cannot be removed, unless the EU is to rediscover what Europe was in its youth. Do not forget: the objective was to end the wars between powers ground down by the two world wars, but also to end the poverty that pushed the people into the arms of dictatorships. It is no coincidence that it was a europhile, William Beveridge, who drafted the plans for the welfare state in the midst of the Second World War.

The European institutions are not up to the task that they are supposed to fulfill today. That makes it all the more necessary that citizens express themselves through parliament, which they will elect in May 2014, and through a constitution worthy of the name. The Commission must take the form of a government elected by the people of Europe and accountable to MEPs. After all the damage it has done, a Commission like the one that is now operating alongside the troika must be sent home.

It has squandered its money, its honour and its time. It has sown hatred among the member states. It has pushed the Greek people into degradation. It has been criticised by an IMF suffering the pangs of a duplicitous conscience. It has reached the stage of what Einstein considered the worst failure of the politician and the scientist: that insanity “that consists of doing the same thing over and over again, yet expecting different results.”

Likening José Manuel Barroso, to an unpopular football referee, The Economist remarks that a growing number of national governments are turning against the president of the European Commission —

The French are furious that he calls those defending subsidies for their film makers “reactionary”. The Germans accuse him of failing to respond to rising youth unemployment. The British say he has changed from a servant of European governments into a slave of the European Parliament.

Part of the reason for this state of affairs is that some of Europe’s national leaders “hardly enjoy high esteem at home,” and the Commission has always been “a convenient whipping-boy.” However, they have now been joined by the International Monetary Fund (IMF), which has delivered one of “the cruellest kicks of all.” The London-based liberal weekly reports that —

An IMF study on lessons from the first Greek bailout in 2010 concluded that the Commission lacked experience of managing financial crises and fiscal-adjustment programmes; that its obsession with fiscal rules blinded it to the recessionary effect of austerity.

As to the fate of the Commission president, The Economist remarks —

To judge from the ugly mood among leaders, Mr Barroso cannot expect the third term that he sometimes hints at. A new referee will surely be called in for the game’s second half.