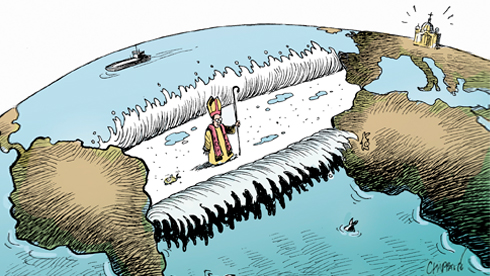 The pope, such a stranger

For the first time in 13 centuries, the pope is from a continent other than Europe and from a culture that does not necessarily share the same set of values. In the run-up to a meeting between the pontiff and Russian President Vladimir Putin, Italian daily Corriere della sera wonders if this signifies the decline of Europe and the rise of new cultures.

[Russian President Vladimir] Putin is going to Rome, to the Vatican, on November 25 to meet with the pope. Apart from any other significance that his visit could take on, especially concerning the future relationship between Catholicism and Orthodox Christianity, this meeting will be between two men who found themselves, last summer, side by side fighting against the United States (and France) in the Syrian affair. While [US President Barak] Obama hesitated and dithered over whether or not to intervene to punish [Syrian President Bashar] al-Assad for having used chemical weapons, Putin and Francis acted in concert to stop the US intervention. The pope fuelled the controversy by suggesting that the Syrian civil war is fostered by arms merchants. He was targeting mostly the West and its thirst for profits.

It is high time for Europe to reflect on what it means, not only for Europe but for the West as a whole, to have a pope from a culture that is very different from ours. A pope who, in relation to Europe, paradoxically combines cultural diversity with the ability to gain attention, to attract and even to spark enthusiasm.

The relationship between the pope and his flock, as well as his attempts to profoundly reform the Church of Rome, concern the world of Catholicism and can only be respectfully observed by those who do not belong to that world. But the relationship of the Holy Father with Europe concerns all Europeans. Just as they are concerned by current geopolitical changes of which one of the most important may be the advent of Jorge Mario Bergoglio to the Holy See.

Europe is no longer Christendom

One could say that [[the arrival of a pope from Latin America repairs an incongruity]] that, for the past several decades, had become more and more obvious and strident. Although Catholicism was spreading and consolidating outside of Europe it was declining in the most spectacular manner in what used to be Christendom. In the last few decades, Europe is certainly the continent in which secularisation (in the form of de-Christianisation) became the most deeply embedded.

From this perspective, Europe is an exception compared with the rest of the world (including the United States). The vigour and vitality of Catholicism, and of Christianity in general, in zones outside of Europe counterbalance their decline on the Old Continent. This is to the point that some sociologists of religions suggest that, if this trend continues, Christianity will quickly become an almost exclusively non-European religion. It is in this sense that Bergoglio’s election repairs an incongruity.

But the election has naturally taken on a vaster geopolitical meaning. It is a sign of and illustrates how the weight of Western cultures has been drastically re-adjusted within the international equilibrium. This shift favours emerging, non-Western nations. It is normal that a man of the Church, be he a pope or a simple priest, would draw his Christian values, as well as his own ideas, from the society from which he has come. And the land in which Bergoglio was trained has a tradition that is indubitably very remote from that of liberal Europe. This could, in time, create problems in the relationship between this pope and Europe, a world about which he knows very little and the little he does know, to hear him tell it, has not swept him off his feet.

The revenge of the “periphery”

The great force of Catholicism has always been in combining the power of the universal appeal of its message of salvation with the ability to make the best of local customs. When the popes were Italian, the other Catholic Churches of Europe cleverly combined loyalty to the Archbishop of Rome with the development of national traits. While under the wing of European popes, the Churches outside of Europe proceeded in the same manner, as is only fair.

This was still true under the pontificate of John-Paul II, who was as charismatic as Bergoglio. But the centre of Catholicism was then still solidly tethered to Europe, while the Churches outside of Europe were confined to the “periphery”. [[Today, it is Europe that is sliding towards the periphery]] and is griping on only because the physical seat of the papacy remains in Rome. This is an unprecedented situation for European Catholics (and in fact for all Europeans).

It will be up to the different national Churches, including the Italian one, to point out to the Holy Father what is good, what is special, what defines the quintessence of European tradition. Without this, the Church of the future will have trouble devising sustainable and harmonious connections with Europe. And it will struggle to find ways of halting its trend toward secularisation. Despite the sympathy that the pope arouses, in the long-run, his universal message could falter against the obstacles and pitfalls that history has forged to separate Europe from the rest of the world.