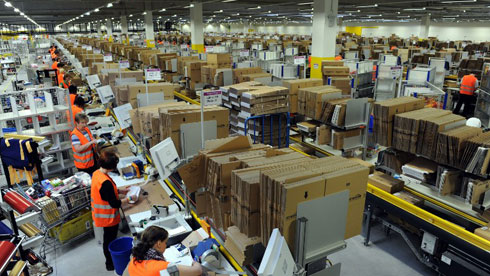 We are the Chinese of Europe

Amazon will open three major logistics centres in Poland. Good news? Not really, because the jobs will be insecure and poorly paid. And the country would be wrong to want to become competitive and encourage this trend.

Poland is a country of cheap labour rather than of advanced business models – that was the perception of a majority of CEOs of multinational corporations who were asked in a recent survey what Poland had to offer foreign investors. It was no different for Jeff Bezos, the US billionaire and founder of Amazon, the world’s largest online store, who, according to unofficial reports, has recently visited Poland.

What matters for his company is that Poland is a country with over 2 million unemployed people, some of whom are prepared to work not only for less than the minimum wage but also on a temporary basis, per hour, several weeks a year.

Amazon is investing in three new logistics centres in Poland. Each will create 2,000 jobs, and an additional 3,000 temporary positions will be offered. “We are excited that Amazon is coming to Poland. The creation of thousands of new jobs is without a doubt a milestone for our economic growth,” said Janusz Piechociński, deputy prime minister and minister of the economy.

Many Polish experts doubt whether the US corporation really deserves the praise. According to tax consultants, it will not pay much in income tax because logistics centres are in fact cost generators. The most profitable part of the business – sales – remains located elsewhere.

“Amazon is known to employ only a handful of people on contracts, offering very low rates to the majority of personnel. At Bad Hersfeld, the company’s largest distribution centre in Europe, where many Poles work, the pay is some €9 gross per hour, where the official minimum wage is slightly over €8. Even unskilled German workers will not work for such money,” said Jerzy Fulara, owner of the job agency Pracomania.pl which has operated on the German market for years and often recruited for Amazon.

Asked about the remunerations it would offer in Poland, Amazon told Wprost they would be “competitive” to wages in the logistics sector. Jerzy Fulara explains that an attractive rate in this case means PLN 10-12 per hour, adding up to a monthly salary roughly equal to the minimum wage.

“I doubt whether in the Poznań and Wrocław areas you will find so many thousands of people willing to work for such little money. The deficit is likely to be compensated with workers brought from other regions where unemployment is higher. Paradoxically, they will be at a disadvantage because if they migrate at all, they’d be better off working in Bad Hersfeld,” said Mr Fulara.

[[It’s the Poles themselves who are responsible for earning their image as Europe’s suckers]]. “We have the highest unemployment rate in the country and the lowest average wage. As a result, we can offer investors extensive resources of cheap labour,” boasts the Warmian-Masurian Voivodeship in the official brochure, Investing in Poland 2014. The Hackett Group, a leading international provider of offshoring and cost reduction solutions, agrees: “Labour costs in Poland are still 50 per cent lower than in western Europe and in the US. Such cost advantage places Poland third in the world behind China and India in a ranking of the best outsourcing locations,” the company said in a recent report, a view that is hardly a compliment.

Over 100,000 Poles are employed at business process outsourcing (BPO) centres that offer back-office (human resources, finance, accounting) and front-office (call centre) services to international companies. The business is a Polish specialty, as shown by the recent creation of 600 jobs in Cracow by the US financial services company State Street. The attraction of the Polish BPO sector is that in Poland a junior specialist (with no previous experience) takes home €100 less a month than his or her Hungarian counterpart and €75 less than in the Czech Republic, as shown by an international comparison of salaries in the BPO sector featured in Business Services in Poland 2013, a report by the Association of Business Service Leaders in Poland.

“Competing mainly with labour costs rather than with innovation is one of the major reasons why wages in Poland are among the lowest in the EU,” said Ryszard Florek, owner of roof window manufacturer Fakro, one of few truly global Polish companies.

“Low-cost jobs are needed too, but they will not make us a prosperous nation. The real profit is generated by companies that are able to create state-of-the-art products and sell them globally, that is really reaping the benefits,” explained Mr Florek.