All hope lost on the good ship Euro?

Not since the Greek crisis in the spring of this year has one country appeared so vulnerable to negative market sentiment. With an Irish bailout an increasingly likely prospect, the European press worries about the consequences for other members of the EU. 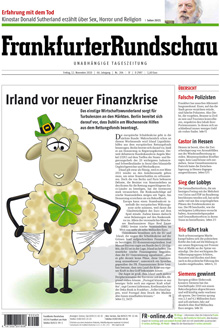 “Ireland headed for a new financial crisis,” announces Frankfurter Runsdschau, as the fate of the Irish economy, weakened by debt and burgeoning interest rates, has prompted a growing sense of alarm in the eurozone.

Portugal could be the next

“The refrain for the heart-rending second act of the euro crisis was launched by Wolfgang Schäuble,” writes Berliner Zeitung. The German Finance Minister wants the holders of sovereign bonds to foot the bill when one eurozone state has to be rescued by the others. “This is major change of tune for investors,” remarks the daily.

“Until now, they assumed that the eurozone would pay up for its members. […] Now the belief that they are subject to greater risk has led them to demand higher interest rates.” The newspaper quotes a member of the board of the European Central Bank (ECB), who points out that “German plans inevitably result in speculative attacks that aggravate the crisis.”

“The surge in interest rates could force Ireland and Portugal to demand assistance from Europe,” points out Diário de Notícias in Lisbon. “The EU is preparing to help Ireland, which is now facing interest rates in excess of 9%. Portugal could be the next country in need of assistance if the markets do not calm down.” As economist Antonio Nogueira Leite explains - without a change in the perception of risk in sovereign debt markets, the probability that Portugal will able to avoid such a fate “is increasingly remote.”

It is all a major misunderstanding 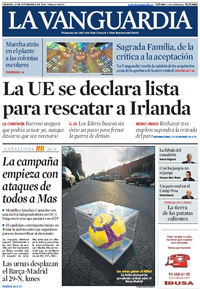 “The EU declares that it is ready to bail-out Ireland," headlines La Vanguardia, which adds that "Spain now faces an unprecedented level of risk." At the G20 summit in Seoul, José Manuel Barroso declared that everything was ready for an Irish bailout "should the need arise", but the European Commissioner’s remarks, intended to reassure the markets, “resulted in further speculation.” The daily points out that fears have been heightened “by an information blackout in Brussels reminiscent of the days which preceded the Greek bail-out” in May of this year.

However, today the difference is that eurozone now has the European Financial Stability Facility, adds La Vanguardia. To put an end to the crisis, the most credible strategy would be for "France and Germany to reassure investors," argues Virginia Romero, of the investment company Ahorro Capital. She also emphasises that an Irish bailout would result in a situation much worse than the one that followed the Greek bailout in May, because it would appear that "the exception is becoming the rule." In short, as La Vanguardia puts it, the main fear is one of "widespread contagion, that extends beyond the ‘peripheral’ economies" of South and West Europe.

“It is all a major misunderstanding,” insists Financial Times Deutschland. The business daily points out that “the habitual behaviour of politicians is distinctly different to the behaviour of investors.” Politics, and in particular European politics, creeps at a snail’s pace marked by compromises and majorities, while the world of finance wants rapid reactions and a solid information on which to base its decisions. “Last spring, Europe was forced to contend with the fallout generated by the clash of these incompatible behaviours.” It was the slowness of the political response which transformed the Greek crisis into a euro crisis — which explains the FTD’s front-page headline: “Act now!"

Irish taxpayers will be worked to the bone

In Dublin, time is running out even faster. In a much commented article in the Irish Times earlier this week, economist Morgan Kelly was unequivocal: “The Irish State is insolvent: its liabilities far exceed any realistic means of repaying them.” But the worst is yet to come, because the tragedy of the Irish economy will be played out in two acts. The first act was marked by a 70-billion euro government bailout for Irish banks which Kelly explains will take “every cent of income tax that you pay” for the next six and half years. The second act will be a crisis prompted by mortgage defaults, which is already on the horizon. “People are going to extraordinary lengths – not paying other bills and borrowing heavily from their parents – to meet mortgage repayments.”

And while all this is happening, Kelly ironically remarks: “It is a testament to the cool and resolute handling of the crisis over the last six months by the Government and Central Bank that markets now put Irish sovereign debt in the same risk group as Ukraine and Pakistan, two notches above the junk level of Argentina, Greece and Venezuela.”

And that is not all. The economist also reveals that “since September, a permanent team of ECB “observers” has taken up residence in the Department of Finance.” Although of many nationalities, they are known there, dismayingly but inevitably, as “The Germans”.” In response to the news that the Irish economy has become a ward of the ECB, Czech daily Lidové noviny worries about the redefinition of “European solidarity,” which now implies that “Irish taxpayers will be worked to the bone and sacrificed for a solely Franco-German vision of European monetary policy.”