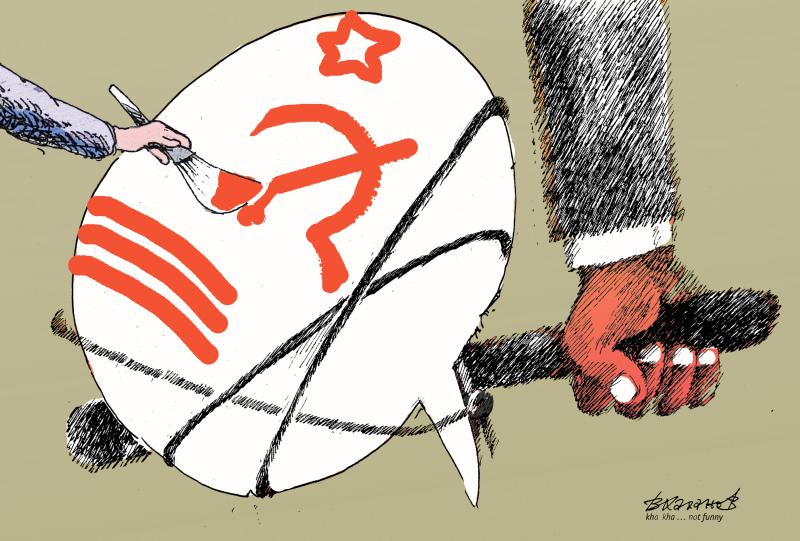 In Estonia, rampant Russophobia puts democracy to the test

In the wake of the war in Ukraine, a sullen national-conservative movement has taken hold in Estonia. Building on latent Russophobia fuelled by the conflict, it is stifling public debate and runs counter to the values of liberal democracy, notes Estonian historian Aro Velmet.

Political scientist Tõnis Saarts wrote after the Bronze Night that a new, more closed and less dynamic model of society has emerged in Estonia, which he called “nationalist defensive democracy”. This model is characterised by forceful conservative nationalism: Russophobia, a focusing of political debate on questions of memory, past history, monuments and the interpretation of historical events.

Another important element of this regime is the “securitisation” of politics: the removal of certain issues from the public debate so that, instead of a plurality of views, all opinions are labeled as either correct or treasonous.

The events of the last few months have shown that nationalist defensive democracy remains vibrant in Estonia. The fate of Soviet-era monuments has become a matter of national importance, which is being analysed by a secret committee within the Government Office.

Estonia's largest universities have decided not to admit Russian and Belarusian students, and Estonia, along with Latvia, Lithuania and Poland, will refuse entry (with some exceptions) to Russian citizens holding short-term tourist visas for the Schengen zone, irrespective of the country where the visa has been issued. Estonia is also calling for a visa ban for Russian citizens at EU level.

Citing the outbreak of the war in Ukraine, the national art museum Kumu decided to remove from display several artworks that criticised the Soviet regime, because they contained images of Lenin and Stalin (a decision all the more bizarre given that Vladimir Putin's regime portrays itself as a successor to Russian imperialism rather than the Soviet project.)

Attempts to discuss these decisions, to weigh up the evidence, to provide context, or to listen to the other side, have often ended with someone in charge declaring that “now is not the time”, that “we are in wartime”, and that “decisive action must be taken’.

Of course, there is a war going on. Ethically and pragmatically, solidarity with the Ukrainians is the only correct stance. Of course, it is precisely by portraying the Second World War as Russia’s unrecognised triumph that the Putin regime justifies its aggression. Countering the propaganda of a foreign state is undoubtedly necessary, and inciting violence has no place in a free society.

However, even under martial law, it needs to be asked under what conditions the fundamental values of liberal democracy might be sacrificed. In the same way, one must consider whether these sacrifices will have the desired effect or if they are simply a cosmetic win.

And let us remember that we ourselves are not at war.

If we start to regard unpleasant opinions as dangerous because we fear Russia, then we have probably been looking into the abyss a little too long

There have been two main casualties, sacrificed on the altar of security in recent months: the Russian-speaking minority’s status as a community essentially equal with Estonians, and the democratic, bottom-up, culture of memory. It is true that when the state government removed a Soviet tank monument from the Russophone city of Narva, there were more consultations with locals than when the Bronze Soldier was dismantled and relocated from Tallinn fifteen years ago.

Yet, in essence, these consultations were essentially cosmetic, the last act of the show was predetermined from the start. In the end, the national government simply argued that the Narva municipality was taking too long to discuss the matter, that the solution was clearly obvious, and there was no more time for debate.

The tank was dismantled and taken to a war museum two hundred kilometers to the west. The government's arguments rested on security concerns on the one hand (provocations could be organised nearby the tank), and on time pressure on the other hand, as the symbolically important 20 August, the day of the restoration of Estonian independence, was approaching.

More : Why Belarus is erasing the memory of WWII Polish resistance

The top politicians of the ruling parties are calling for permanent residents of Estonia who hold Russian citizenship to be deprived of the right to vote at local level – i.e. for more than 80,000 Estonian residents to be left unrepresented. A visa ban for Russian citizens at the European level is somewhat more justifiable, but would nevertheless require a much more thorough debate than the current rhetoric, limited to “but we are at war”.

In each of these examples, an entire group of people is treated as a security threat, regardless of their actual views or actions. Repeatedly, the reason given for this kind of group discrimination is a lack of resources – ”we do not have the means to evaluate the loyalty of every single individual”. The reader may wonder how happy he would be to be thrown in a solitary-confinement cell to sober up simply because he is a man (and therefore more likely to be a drunk-driver), and because there are no resources for more thorough checks. Collective punishment is a vestige of the nineteenth century, and should remain there.

It turns out that in Estonia you can be a Conservative, a Liberal or a Socialist – as long as you screw the Russians, you always win

At the same time, the range of issues that are now considered threats to national security have widened alarmingly. We may not agree with some people's views on history or urban planning, but these views must remain open to debate. In a situation in which serious newspapers publish articles headlined “We do not need to consider the feelings of Russians” and “We are fed up with paid trolls”, there can be no meaningful debate (Eesti Ekspress has been a happy exception). If we start to regard unpleasant opinions as dangerous because we fear Russia, then we have probably been looking into the abyss a little too long.

In the absence of debate, it is also more difficult to assess whether the restrictions imposed in the name of security are actually working. I cannot see why publicly mocking the feelings of Russian-Estonians would help integration or ease tensions in any way. One dissident organisation in Russia planned to move a part of its activities to Estonia, but abandoned the project when it heard about the visa-ban plans. And, as a good friend suggested, instead of dragging dusty statues around, the money could simply be donated to Ukraine – the benefits would be much greater.

On the other hand, nationalist defensive democracy is a political winner. Even the Social Democrats have seen their poll scores rise thanks to the hard-line rhetoric of their interior minister. It turns out that in Estonia you can be a Conservative, a Liberal or a Socialist – as long as you screw the Russians, you always win.