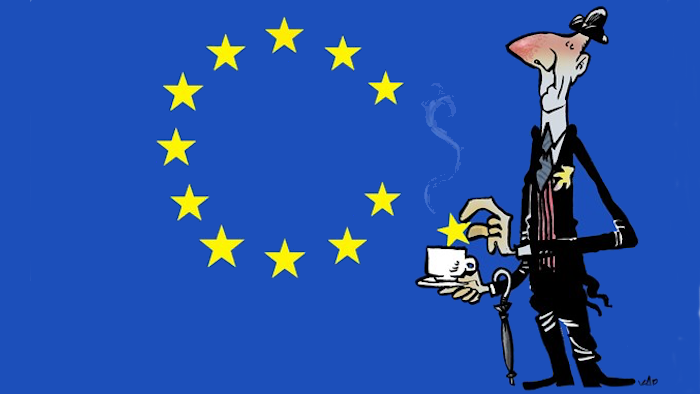 ‘If Britain is clever, it will remain a member of the EU’

Although most of European newspapers and columnists would prefer Britain to remain within the European Union, some of them are beginning to sense that getting rid of an unpredictable and unwilling partner could be an opportunity for those willing to move on towards further integration – despite the risk of others following London’s trail.

“Behind the scenes everyone is quaking at the thought of the ‘unthinkable’”, writes Thomas Mayer in Austrian daily Der Standard. According to the columnist, the EU is currently so unpopular in the UK that its top officials avoid to show up in Britain or to speak publicly in favor of Remain. As for the European governments it’s even worse: Mayer believes that they “have a lot of good reasons for wanting to keep London in; but”, he adds, “they behave like they couldn’t care less whatever the result is.”

In some countries, however, Brexit is seen as an opportunity rather than an issue. Like in Poland, as Marek A. Chicocki writes in the Conservative daily Rzeczpospolita: “A Brexit would by no means spell the end for the Union but simply pave the way for its thorough overhaul. Poland is the biggest country outside the Eurozone, meaning that it would like to assume a more important role within the EU. So”, he concludes, “let us not regard a Brexit as a disaster but as a chance to bring our own ideas into this restructuring of the EU” – if the EU survives, of course.

Which would be all but certain according to Bernardo Valli. In Rome’s La Repubblica, the veteran columnist writes that a country leaving the EU “would shake the whole system”: “It’s easy to figure that, after Brexit Marine Le Pen will ask for Frexit. That would give her campaign for next year’s presidential election an extraordinary boost. In Europe, movements that are allied or under the influence of Le Pen’s Front National would be eager to follow her example.”

Some commentators consider that playing the scaremongering as the “In” camp is doing is counter-productive. Like Ferreira Fernandes, a columnist within Portuguese daily Diario de Notícias, who believes that Bremainers “may be right” when they talk about “the economic disaster that would ensue, the disinterest of Arab and Chinese investors and an isolated City of London and the retaliatory measures from Brussels” should the “Out” win. But they “should also be able to present other convincing arguments, like political and cultural interests or Europe’s common destiny” – a point in which, Bremainers “apparently don’t really believe in themselves.”

On an opposite position, Paris’ Le Monde thinks that Prime Minister David Cameron’s tactics of “smashing Brexit under a carpet bombing of reports every time more alarming…seems to work”. But the “In” needs to “keep the discussion on the economy” and should not “drift into immigration”. And even if it wins on the 23 June, troubles might not be over for the EU, as Mr Cameron “will want to foist his political agenda on Europe, with a revival of the single market, a de-bureaucratisation of the EU and a more active role for national parliaments.” And, – something Paris might not be happy with “economic convergence between Germany and the UK.”

Paris’ Les Echos talks to Centre for European Reform’s Simon Tilford. “He warned that If the UK were to adopt a points-based immigration system regarding Europeans, the EU would “probably come up with a similar scheme.” He says Britons choosing to live elsewhere in the EU “would have to apply for visas or work permits.”

However, should Brexit happen, political scientist Hendrik Vos believes in Brussels’ De Standaard that “basically a deal will be worked out with the British that will look very much like the agreements with Norway or Switzerland. On paper these countries are not members, but in practical terms they are. […] If it comes to a Brexit, heads will roll in Britain, first and foremost that of the prime minister. There are limits to political acrobatics. But at the end of the day we’ll wonder whether Brexit was worth all the fuss. Complex rules full of clauses and protocols will have to be worked out with the EU. A lot of costly political energy will be wasted..”

A few European publications took a stance on the referendum. Among them, Der Spiegel even had two different covers: one in German saying “Bitte geht nicht!”, another one in English saying “Please don’t go!”. “If Britain is clever, it will remain a member of the EU, because it will recognise that the future of the west is at stake. If Britain is clever, it will realise that it is not a world power on its own, that it will lose much with a yes to Brexit on June 23, and gain nothing but a brief moment of pride”, writes Hamburg’s magazine. But should Britain vote to leave, “because a disproportionately high number of older and less well-educated British want it so passionately, Germany and the rest of Europe will have to accept that today’s EU is dysfunctional and unattractive. The EU should then mourn the loss of departed Britain and learn from it, and it should cease giving humiliating gifts to those who have left and develop some resolution.”

And Berlin’s strong stance on avoiding Brexit by any means is explained by its concern that it “would lead to a breakdown of the project of Eropean integration”, says Dutch magazine Elsevier, according to which, “the traditional ‘big three’ of the EU (Germany, France and the UK) could be out of balance if the UK were to leave. Germany fears that this could lead to a surge in power for France and that other countries would want to follow the British example.” What’s more, Elsevier adds, “the European Central Bank considers Brexit as a threat, both for the Union and the UK itself.”

Geopolitical scientist Jean-Sylvestre Mongrenier explains in Challenges magazine that “although the Franco-German relationship is crucial for Europe’s future, that doesn’t mean the UK can be neglected. The UK is a former powerful and prestigious colonial country, a permanent member of the UN Security Council and is the fifth largest economy in the world. Its departure would put Europe’s future in jeopardy. Britain’s membership of the EU and its active participation to European diplomacy represents a geopolitical imperative.”