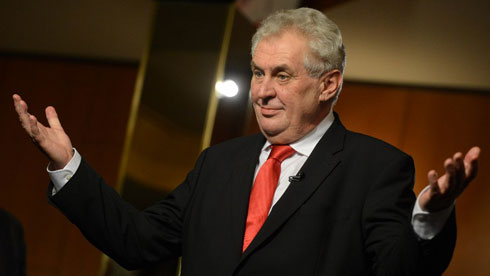 President Miloš Zeman after his election victory on January 26, 2013

Regardless of how the current parliamentary crisis ends, three general conclusions can be drawn. First, political parties as a mechanism for representing the interests of citizens in decisions affecting the public have failed, but we have no alternative to them. Second, our first directly elected president, Miloš Zeman, is working for the “Putinisation” of Czech politics, in line with a general tendency among post-Communist countries in Central Europe. And third, European integration is now probably the only guarantee of liberalisation in Czech society and the whole of Central Europe.

We have come to a situation where we are forced to defend the major political parties, even though they do not deserve it. Political parties have not only been failing for a long time to break away from the shadowy underworld of their powerful supporters, but their expertise is almost nil. The parties are incapable of taking a strategic approach.

The most acute example of this is the introduction of direct presidential elections. Despite nearly unanimous warnings from political scientists and constitutional lawyers, political parties proved incapable of heeding the consequences. And so we have gotten into the dismal situation in which the majority of the public draws satisfaction from the paralysis of the major political parties.

The inability of the political parties to defend parliamentary democracy effectively is, however, primarily due to their utter lack of respect for their political opponents, which in the advanced democracies is guaranteed on the one hand by respect for constitutional rules and, secondly, by a taste for a plurality of opinions and interests. Here in the Czech Republic, the latter just as absent among the parties as it is among the public. [[The parties are havens for opportunistic, rent-seeking and strictly marketing-oriented politicians]], and have no room for the defence of political principles and interests or for the promotion of critical arguments. Their defence of parliamentarianism seems rather implausible, since the political parties got around to it only when it came down to their naked political survival, and they have not given a damn about it for the last 20 years.

In [appointing his former aide Jiří Rusnok to form a caretaker government], Zeman opted for an unprecedented boycott of the Parliament, despite the Parliament being convinced of its own capacity to act. Depending on how Zeman deals with the constitution (and [former president] Václav Klaus paved his way in that), the president treats the constitution as an instrument of his own power rather than as a restriction to it. The constitution, however, must first and foremost constitute a system of checks and balances and assumes the constitutional institutions will supervise, support, and above all respect each other.

The current situation is very similar to the crisis of political parties that came with the first republic [the period between the two world wars]. The starting point of this crisis was a refusal to accept party pluralism and a tendency towards authoritarianism. The decimation of the First World War and a hearty pitching-in by comrades from Moscow introduced factors that spurred the tilt away from democracy. The democratisation that followed did not sufficiently liberalise the country as to effectively block the shift away from democracy after the Second World War.

[[The current crisis is, in a sense, an example of Czech society’s incompetence at governing itself democratically]]. It may be considered our good historical fortune that, thanks to European integration, the drawn-out political crisis that led the president to increase his power will not necessarily lead to a shift away from democracy. The fate of democracy in the Czech Republic today is essentially tied to the success of European integration and the democratisation of Europe as a whole. The full encroachment of oligarchies into economic relationships and the “Putinisation” of Czech politics might already have been complete today had the EU not existed. In the European Union, the unique “positively deviant” pockets of liberal culture now have a powerful advocate.

Let us all hope that the next 25 years will bring a Europeanisation of our political and economic circumstances that will be enough to allow an efficient and benign system of democratic governance and the rule of law to take root in our country.