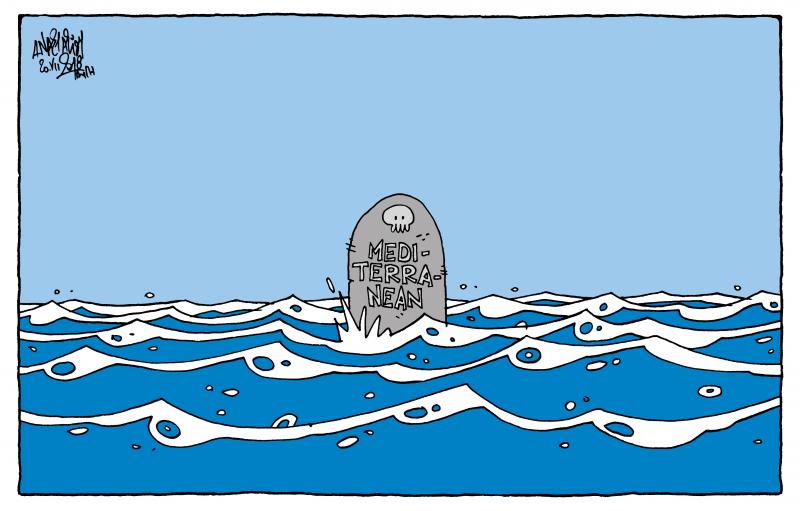 EU migration policies ‘have killed over 40,000 people since 1993’ – A campaign for the abolition of Frontex

"Abolish Frontex" is a coalition of organisations calling for the dismantling of Frontex, the European Agency for the Management of External Borders, which they hold responsible for a policy that both directly and indirectly endangers the lives of those trying to reach Europe.

Abolish Fronte" is a coalition of about 40 associations and organisations worldwide, which is calling for the closure of Frontex, the European Agency for the Management of External Borders of the Member states of the European Union. These associations include Proactiva Open Arms, a Spanish NGO devoted to search and rescue at sea; the German NGO Sea-Watch (known for the repeated clashes between captain Carola Rackete and Matteo Salvini, former Italian Interior Minister  and leader of the anti-immigrant League party), France’s Utopia 56 association, and Italy’s Nigrizia Foundation and Baobab Experience.

In an open letter sent to the European Commission, the EU Council and the EU Parliament, the coalition denounces the "illegal and inhuman practices" of Frontex, which they accuse of promoting and applying violent policies against migrants.

The petitioners criticise a political practice which implements policies that violently affect the lives of those seeking to enter the EU, in the name of security - which is the prevailing political reading in Europe, as evident in the new European Pact on Migration and Asylum.

"Over 740 people have died so far this year trying to cross the Mediterranean, looking for a place of safety,” the letter says. “The EU’s border regime forced them to take dangerous migration routes, often on unseaworthy vessels; it enlisted neighbouring countries to stop them on their way; met them with violence and pushbacks; or refused to rescue them – abandoning them to drown at sea".

What is the cost of these policies? Human lives, say the petitioners: "The policies of ‘Fortress Europe’ have killed over 40,555 people since 1993. Left to die in the Mediterranean, the Atlantic and the desert, shot at borders, [to die] by suicide at detention centres, tortured and killed after being deported –– the EU has blood on its hands".

"For once, a message from more radical groups who have never considered migration policies to be reformable, but have always had an 'abolitionist' approach, has made its way into the mainstream media", commented Francesca Spinelli, journalist and migration specialist. Spinelli said that this is not just about eliminating Frontex: “It is also about the principle of administrative detention of people in so-called irregular residence (and not 'humanising' detention centres), eliminating borders as an instrument of discrimination and a theatre of violence (and not only welcoming 'real' refugees), eliminating the EU's involvement in the instability of other parts of the world (and not 'helping them at home' by instrumentalising development aid)".

Frontex is also under criticism of the EU institutions, finding itself  in the crosshairs of Olaf, the EU's anti-fraud watchdog, for misconduct and illegal operations to prevent migrants from reaching EU shores. So-called 'pushback' rejections made before people have time to apply for asylum are illegal: in 2020, the Border Violence Monitoring Network (Bvmn) published a report listing at least 900 such cases (here and here). Furthermore, in May 2020, a legal action was filed at the European Court of Justice against Frontex, on behalf of two asylum seekers who claimed to be victims of violence and illegal refoulement.

Another criticism comes from the European Court of Auditors which, in early June 2021, published a report claiming that Frontex 'still does not offer member states satisfactory support in managing the EU's external borders', and that the agency lacks accountability for its work and the costs it generates.

At the end of May 2021, the United Nations High Commissioner for Human Rights (OHCHR) published a report entitled Lethal Disregard, Search and Rescue and the Protection of Migrants in the Central Mediterranean Sea. The study, conducted between January 2019 and December 2020, highlights  all the technical tools and legal obligations which exist to avoid making the Mediterranean an open grave.

OHCHR highlights five key issues: the lack of assistance to migrants in danger at sea; dangerous interceptions and rescues; pushbacks; the criminalisation of NGOs and activist; delays in landings and inadequate reception. This is not just about fatalities, says the High Commissioner: the lack of protection of migrants "is not a tragic anomaly, but the consequence of concrete political decisions and practices by the Libyan authorities, member states and EU institutions, and other actors".

Faced with these criticisms, the question arises as to the real usefulness of Frontex. "Of the 39 European agencies, Frontex is not only the most lethal for non-European citizens, it is also the most useless for EU citizens, as it does not bring them any benefit," Spinelli says. "It only benefits those parties and governments that gain consensus by promising to protect voters from non-existent threats of 'invasions' and 'major replacements', and those companies that thrive on expanding surveillance and militarisation of borders. The very existence of Frontex is a scandal, even more so than the growing avalanche of public money it sucks in.”

Frontex did not respond to our request for comment.